Find out who the Mayor is, what they do, how to invite the Mayor to your event, and about the coat of arms. 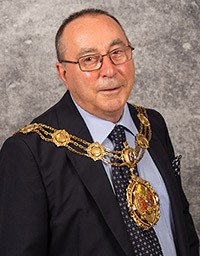 Councillor Bruce Thomas was elected as the Mayor of Rushmoor at our Annual Council Meeting on 25 May.

First elected as a councillor in 2012, Councillor Bruce Thomas represents Manor Park Ward in Aldershot. He has previously served as Deputy Mayor in 2020/21. Councillor Thomas has been Chairman of the Development Management Committee from 2016/17 to 2019/20.

Our Mayor has selected two charities to support during his mayoral year and will be fundraising for:

The Mayor is supported in his role by the Deputy Mayor, Councillor John Marsh.

First elected in 1976, Councillor John Marsh first served the residents of Farnborough West Ward until 1979 and then represented West Heath Ward from 1979 to 1994.  He was re-elected in 1998 in Fernhill Ward and has served continuously since then.

Invite the mayor to your event

We will contact you about the Mayor's availability for your event within seven working days. Due to demand, the Mayor may not be able to accept all invitations.

The role of the Mayor

The Mayor is the first citizen and the Queen's representative in the Borough and, as such, takes precedence over all other citizens in the Borough. The only exception to this rule is when royalty or the Lord-Lieutenant are visiting the Borough.

The office of Mayor dates back as far as AD 451. The title is derived from the French, "Monsieur le Maire" and before that it probably originated from the Latin "Major".

Local authorities, which have been granted borough status by the Crown, have no more powers than ordinary district councils, but the chairmen and vice-chairmen of borough councils have the right to be styled 'Mayor' and 'Deputy Mayor'.

In the role as the civic head of the borough, the Mayor represents the borough at all civic ceremonial events.

During the term of office, the Mayor will attend up to 300 engagements. These may include:

The Mayor also chairs full meetings of the council in accordance with standing orders, and conducts the meeting in a fair and impartial manner.

The Mayor is formally appointed to the office of Mayor at the first meeting of the Council in the municipal year. This meeting is more of a ceremonial event and is normally referred to as 'Mayor-making'.

To read more about how we select the mayor, please visit our page about the constitution. 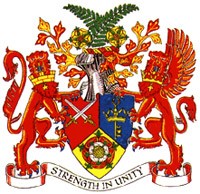 The borough's coat of arms

The coat of arms was granted by the College of Heralds, 7 August, 1975. The crossed swords in the first section of arms depict the borough's close association with the army, and the key surmounted by an astral crown in the second section signify the connection with the Royal Aircraft Establishment. The rose in the third section is the Hampshire rose, the emblem of the county in which Rushmoor is situated.

The fern leaves and roses are similar to those in the crest of the former urban district of Farnborough.

The lions used as supporters are similar to those in the coat of arms of the former borough of Aldershot, although the right hand lion now has wings to denote the borough's association with aviation. The right hand lion also has an astral crown around its neck, with a Latin cross hanging from it. The left hand lion has a mural crown with a gold star.

The motto 'strength in unity' was selected by the council from many suggestions submitted as signifying the amalgamation of the two towns of Aldershot and Farnborough.